During her residency at bb15 Clarice Calvo-Pinsolle met the local artist Mathias Müller. His text gives an insight into her newest project.

Which are the cities, the places, that remain unforgotten? Those through which we walked with open eyes, attentively watching everything? Or perhaps those in which our thoughts were elsewhere, everywhere else as we looked into nowhere, seeing nothing. But our body, without us noticing it, perceived its surroundings through the skin, through the ears.

Clarice Calvo-Pinsolle is an artist who does not visualize a city, does not form an image of a city. For her, the eye is not the decisive instrument of perception. It’s not about looking, but listening. No photos are taken, no camera is used, but a recording device. A particular procedure. How does she remember the places she has been? By listening again to the sounds she heard back then. An imageless remembering – a remembering, without resemblance.

But how can such a hearing take place? After all, the ear is not the only organ that is sensitive to sound waves. The whole human body is capable of perceiving vibrations, like the trembling of the ground sensed through the feet or those deep tones that can be deep within the guts. Even the fluid inside the eye can vibrate, even resonate. In this way, hearing and memory correspond. The whole body is part of it. A smell, a taste, an unfamiliar position or posture taken by accident, a sudden movement and already a memory breaks forth: not the memory of an image, or even of a smell, a taste or sound, but perhaps the memory of a place, of a moment in which nothing was seen.

In search of memories, in search of sounds. A walk through the city of Linz with a recording device to record memories. But also in a search for objects of memory, items subjected to memory and other forms of recording, for recording sounds or memories. A sound is almost the most volatile thing there is. Often enough they are overheard, but even a sound that is loud enough to notice is quickly forgotten. Once something is said, it cannot be taken back. But where does it go afterwards? Every sound, every noise, even every word, is changed by the room in which it takes place. By the resonances of the walls, the windows, the furniture. And these change are easily made audible, for example by repetition.

Perhaps the room is also changed by sounds. Does something, a residue perhaps of sound and memory, remain in the walls, windows, furniture? Some alloys are said to have memory because they ‘remember’ the shape they had at a certain temperature. Our everyday life is filled with objects that are receptive to memories and sounds, objects on which their environment or certain events have imprinted, inscribing themselves in one form or another; like used keys or trousers that retain the shape of the body that once wore them; a half-read book that opens itself again on the very page where we stopped reading it the last time; a cup without its handle; the Large Glass. Traces of long usage or a sudden occurrence are retained. Impressions, not determinations.

Pipes, hydrophones, a used exhaust, satellite dishes. Sounds and memories. Reverberation and remembrance. These are the materials Clarice Calvo-Pinsolle works with in her installations. For bb15 she considered different objects: acoustic jars, ‘vases acoustiques’ – ceramic vases that, according to the artist, were embedded in the walls and murals of French churches of the 16th century to transport sound through their shape, their material, to amplify it. Not sound reflected back from the wall, rather resonance. “For me,” says the artist, “these are objects carrying memory, the memory of forgotten, extinct voices. They amplify voices, maybe voices of people you don’t hear enough, forgotten voices and voices of the past.”

Often these historical vases were arranged in a certain way, forming patterns for example, or embedded in the murals. At bb15 they are not embedded in a wall at all, but without, held by a steel construction. Inside each pot a loudspeaker is affixed. In this installation memories and sounds recorded in the city of Linz travel from sound vase to sound vase, from acoustic jar to acoustic jar. The installation as composition.

Each of these ‘vases acoustiques’ are manufactured by hand, each one has its own shape and form, its own irregularities, impurities, and so the same sound in each acoustic jar sounds different. Each jar vibrates, has a resonance, amplifies the sound or perhaps is vibrated by the sound of other acoustic jars in the room. They change each other, resonating together.

An imageless remembering – remembering, without resemblance. Or in this case, even more distant, a foreign memory, in the middle of the city of Linz. A memory of Linz, but not one’s own. Perhaps in this installation not even the artist’s memory, but something else entirely that belongs to no one, exists only now, here, at the instance of listening. The ceramic vases are not at eye level, they are placed at ear level. They are not closed, yet still an opening is necessary. Not to prick up ones ears, but to make the body a hearing organ. 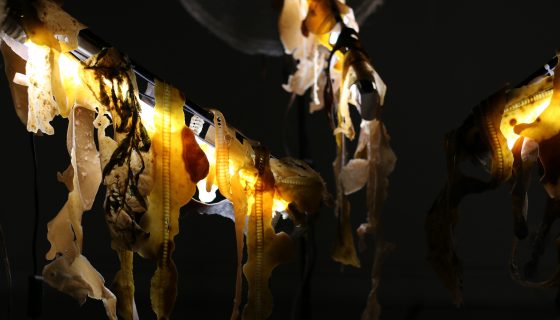 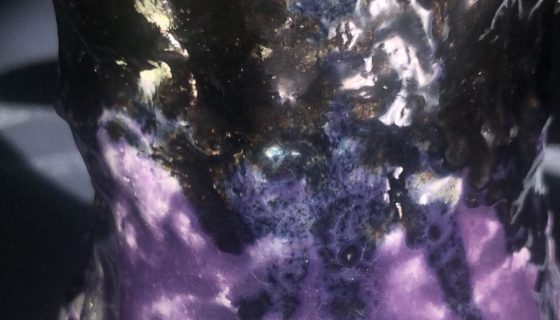