During his residency at bb15 Lukas de Clerk met the local artist Sarah Rinderer. 14 fragments gives a glimpse into the experience. Video by Sara Piñeros

[1]
polyester fabric, slowly beginning to lift itself from the floor. an inflatable children’s game in which two players compete in moving a hovering ball in the constant air flow from one cone to the next green yellow blue red green yellow finally into a basket. now there are earplugs in it.

tubes – glass clear – lead from the cones upwards, get tangled up, branch out into clusters. the tube’s ends connected to the heads of recorders with adhesive tape.

little by little the air cushion grows diagonally into the exhibition space of bb15, at an angle of about 45° – the same angle the body and the recorder flute should form towards the ground.

[2]
we sit down at the danube beach to talk about his work. the shadow of a tree on the ground, branching out, smaller and smaller. the way he brings the words to his lips: loosely, gently. before he got into art, he studied not being visible: hiding away into sound. intuitively, non-chalant, child-like almost.

[5]
not all cones are connected to tubes and recorders.
the airflow feels cool and surprisingly strong, when you hold your hand over the hole at the cone’s tip.

[6]
do you still have a recorder at home? what did you play on it? when? did you like it? how have you been taught that music should sound? and how long has your recorder been silent? for how many years have you not played?
(questions for a warm, personal conversation)

[7]
the sound of the danube. a recorder is supported by the lips and by the thumb of the lower, right hand. he stretches out his legs, tells me what supports his ideas from a musical perspective. the synthesizersounds by éliane radigue, by daphne oram, by delia derbyshire. the handling of an instrument that has never been heard before.

(to detune to disremember to unlearn to play)

[12]
he moves his thumb up and down, fast
above the fan
the shaky vibrato
of red polyester

[13]
hardly any wind at the danube beach. traditional folklore music is inspired by nature, imitates the sounds of nature, he says. today – a motorboat pulling a water skier; he follows it with his eyes – we need to imitate the sounds of machines, become machines.

[14]
now i’ve talked a lot.
the cushion of air slowly begins to collapse,
to fold like water
light high sigh crackling, crumpling, wrinkling waves
drowning in air
my mouth feels really dry.
at the danube beach he sinks backwards onto the grass
the polyester fabric,
greenyellowbluered,
back onto the floor of bb15’s exhibition space. 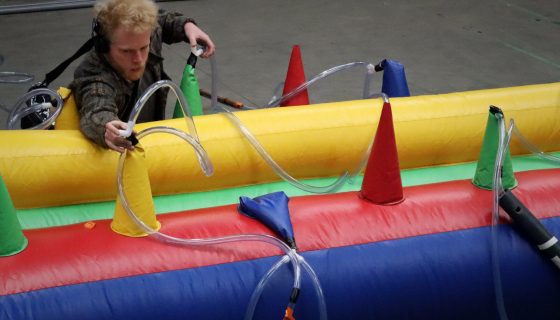 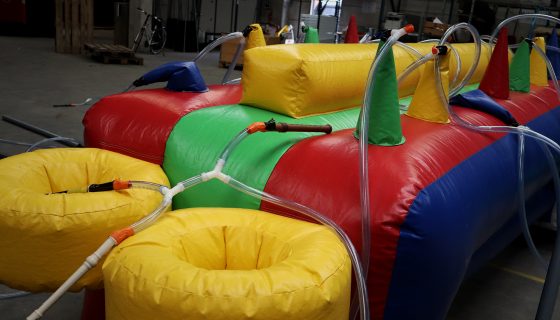